The overall goal is to slow down the progression of the disease, and ultimately stop it. To do so, the aim is to limit cell death resulting from either acute and/or chronic neurodegenerative conditions, re-establish normal cerebral blood flow, limit inflammation, and restore regular cellular functions. Using a variety of in vitro and in vivo protocols, using preclinical and human specimens, several new hypotheses and potential therapies are being investigated and developed.

One objective is focused on understanding the unique properties of hemoglobin, heme and iron in the brain using cellular/molecular techniques and various models of stroke, traumatic brain injury/concussion, Alzheimer disease and aging.

New knowledge is gained specifically, by investigating the action and the role of activity of the heme oxygenase enzyme and its unique bioactive metabolites, namely, carbon monoxide, iron, biliverdin, and bilirubin.

Using cultures of neurons and brain tissues, Dr. Doré has observed that pre-treatment with a standardized extract of Ginkgo biloba or Ginseng could alter the presence of specific genes/proteins important in neuronal function. Individual components of the extract are ineffective, supporting the synergistic principals of Chinese medicine. Similar experiments and results have been obtained using resveratrol, which appears to be an active ingredient concentrated in red wines, and which has been proposed to explain some of the beneficial effects associated with the so called “French Paradox.” These alternative medicines could provide resistance against damage induced by free radicals, the toxins that are generated with aging and are the hallmark of many neurodegenerative processes.

Ultimately, the aim is to perform basic research using innovative tools to test original hypotheses and find new treatments that could have clinical applications for the population. 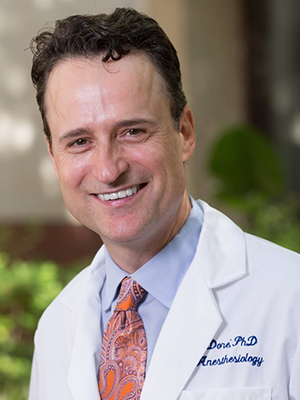 See all publications on PubMed