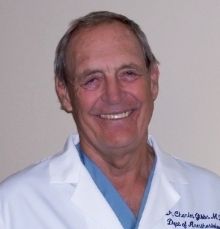 Emeritus professor Charles Parker Gibbs, MD, passed away on June 25, surrounded by his loving family under the care of Haven Hospice in Gainesville, FL. He was 84. Dr. Gibbs’ influence as a physician and educator left an indelible mark on the University of Florida College of Medicine and beyond as a leader of local and national organizations, a visiting professor to colleges across the globe, and a consultant for several national agencies.

Gibbs was born in 1936 in Fort Wayne, Indiana. He received his bachelor’s degree from Indiana University in Bloomington before attending the Indiana University School of Medicine, where he received his medical degree and served as a resident in obstetrics and gynecology. Gibbs also completed an anesthesiology residency at the University of Miami School of Medicine in Miami; a surgical fellowship at the Mayo Clinic in Rochester, Minnesota; and a National Institutes of Health research fellowship at the Nuffield Institute of Medical Research in Oxford, England.

In the late 1960s, Gibbs served for two years as an obstetrician-gynecologist with the U.S. Air Force at the Eglin Air Force Base in the Florida Panhandle before joining the faculty at the UF College of Medicine.

Gibbs began his career at the College of Medicine in 1972 as an assistant professor in the Departments of Anesthesiology and Obstetrics and Gynecology. He also served six years as the college’s Assistant Dean for Curriculum. He then moved to Denver, where he began work at the University of Colorado and served as Professor and Chair of the Department of Anesthesiology from 1986 to 2000.

Gibbs’ impact on medical education at the UF College of Medicine lives on today in the lives and careers of the students he taught, and his efforts were officially commemorated in 1982 when the graduating class honored him with an “award for concern and efforts toward the improvement of medical education.”

In 2001, Gibbs transitioned to a courtesy clinical professor role for the Department of Anesthesiology, a position he maintained for the last two decades.

A former president of the Alachua County Medical Society and chair for several committees within the American College of Obstetricians and Gynecologists and the American Society of Anesthesiologists, Gibbs also served as a consultant for national entities like the Centers for Disease Control and Prevention’s Division of Reproductive Health.

As a researcher and scholar, Gibbs presented papers and lectures internationally and contributed chapters to anesthesiology and obstetrics and gynecology textbooks printed throughout the 1970s and 1980s.

Gibbs passed on his love of medicine to his son Charles Parker Gibbs Jr., MD, who currently serves as the Chief Medical Officer for UF Health Shands, Senior Associate Dean for Clinical Affairs at the UF College of Medicine, Chief of the Division of Musculoskeletal Oncology, Director of the Orthopaedic Oncology Laboratory, and the Eugene L. Jewett Professor of Orthopaedic Surgery.

A private celebration of life is being planned by the family. They ask in lieu of flowers, donations be made in Charlie’s name to either the Lady Gator Golf Boosters or Ronald McDonald House Charities of North Central Florida.