A multipronged approach targeting pharmaceutical waste generated during anesthesia care has seen success by improving the efficiency of medication delivery and implementing new strategies for safely disposing of controlled substances.

The Department of Anesthesiology is seeking to reduce waste from upstream to downstream, said Lauren Berkow, MD, FASA, Professor of Neuroanesthesiology and Director of Anesthesia Equipment and Supplies.

For upstream waste, efforts have focused on the proper selection of medications, which means ensuring that providers draw up only what they plan to administer for that case.

In addition, Omnicell drug-dispensing machines have been added in all operating rooms in the UF Health Heart & Vascular Hospital and Neuromedicine Hospital and are being installed in the newly renovated North Tower operating rooms. These machines help providers administer the correct dose of medications at the point of care.

“We have reduced waste by having the Omnicells right there because if you need a medication, you can draw it up immediately,” Dr. Berkow said.

Another strategy is using prefilled syringes for common medications, which do not expire until the seal is broken. This is advantageous for waste reduction because if providers do not use the medication for one patient, it can be kept for future use. 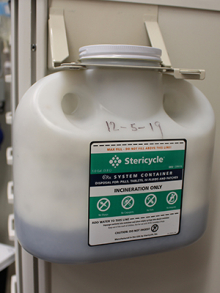 Inevitably, though, anesthesia care generates medications that require disposal, which is where a newer strategy has been deployed over the past year and a half throughout UF Health: Stericycle containers.

When narcotics or propofol are placed in these containers, the drug is immediately inactivated, thereby preventing the substances from entering the waste stream. This is especially important for propofol, which does not degrade in nature and is toxic to the aquatic environment.

An additional advantage is reduced diversion risk by eliminating the possibility that a liquid substance could be pulled out of a disposal bin.

“If you make it into a solid form in the Stericycle container, you can’t divert it,” Dr. Berkow said.

In 2019 in the North Tower, 694 containers of non-hazardous pharmaceutical waste and 1,362 containers of hazardous waste were picked up for disposal by Stericycle, representing 45,995 total pounds of waste.

By volume, propofol is the most commonly wasted medication in the operating room, and research has documented rising rates of abuse among providers. A survey of 126 U.S. anesthesiology departments with residency programs published in Anesthesia & Analgesia in 2007 reported that the observed incidence of propofol abuse was 10 per 10,000 anesthesia providers over the past decade, a fivefold increase from previous surveys of propofol abuse. The study also noted that propofol was not regulated by the pharmacy at the time of diversion at most programs, and this lack of control had a significant association with abusing propofol, which can be fatal.

Separately, Dr. Berkow is working on a quality improvement project with fourth-year anesthesia resident Peter Nguyen, MD, studying waste disposal practices of anesthesia providers, their knowledge of where certain waste should go, and how this knowledge could be disseminated.

For instance, a blue-white bin in the operating room is intended for partial/unused medication vials, whereas empty vials and bottles should be placed in the trash. However, numerous empty vials are found in this blue-white bin, which often has sharps inside, Dr. Nguyen said. He is working on informational posters to educate providers about proper disposal and also hoping to obtain information about the costs of disposing waste in the bin versus a trash bag.

“Thus, we could potentially be saving money and reduce potential needle sticks in the OR,” he said.