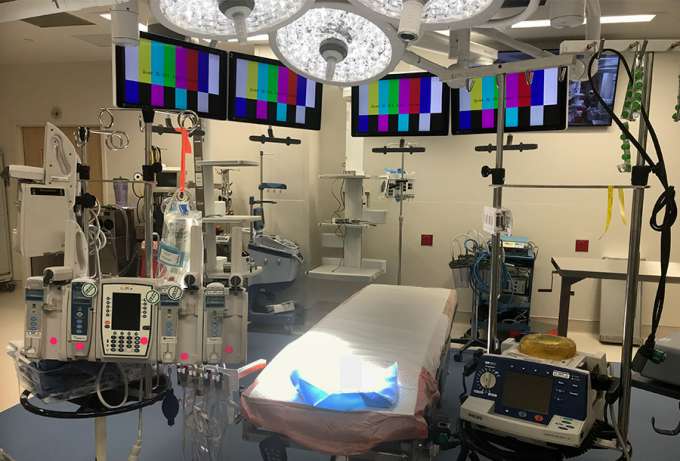 After about nine months of extensive renovations that continued into last-minute finishing touches over the weekend, four completely upgraded and expanded North Tower operating rooms equipped with cutting-edge technology opened on Jan. 13.

The four rooms are the first phase of a massive makeover to the North Tower, which will result in full renovations for all 20 North Tower operating rooms as well as two cardiac catheterization labs within the operating room and one pediatric procedure room in the preoperative area.

The renovations are also carving out new pediatric and adult preoperative and post-anesthesia care unit (PACU) space, which will accomplish a major goal of separating child from adult patients. That space will be where locker rooms and offices currently are on the second floor, while new locker rooms will be installed above the Atrium. This phase of the project will result in about 61 preoperative and PACU spaces, a substantial increase compared to the current 19 PACU spaces and 10 preoperative spaces.

The renovations will continue in phases, with the entire project likely to be completed in 2½ to 3 years.

The renovations will increase the size of each room to roughly 600 to 700 square feet and replace the electricity, gas, and plumbing. New electricity and increased capacity was important because providers were occasionally encountering problems with not having enough circuits for necessary equipment, Dr. Davies said. 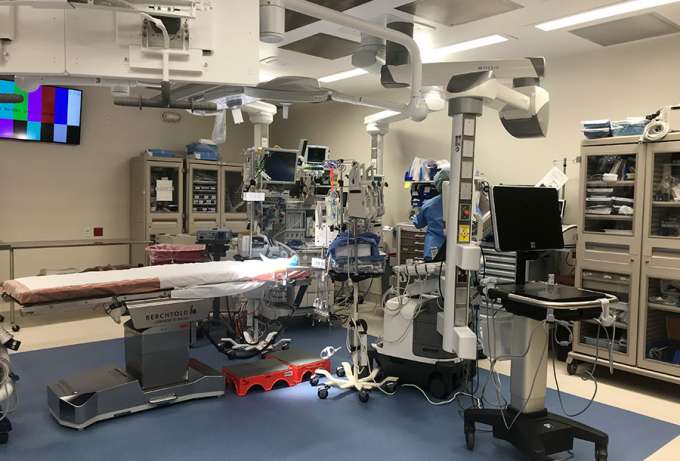 The rooms also feature advanced technology, including video integration on screens that can be independently controlled, offering increased flexibility for providers. A surgeon could see vital signs on one screen while echocardiography machine images could be visualized on another, for example.

The rooms also have Omnicell machines that allow providers to access medications for point-of-care delivery. The machines, which were installed in the HVN tower, are becoming industry standard, Dr. Davies said.

Specialized equipment for cardiac surgery and point-of-care blood gas machines so providers do not have to send samples to a lab were installed and adjacent supply rooms were fully renovated.

The renovations were vital for upgrading the infrastructure needed for the advanced cases now being performed, such as laparoscopic procedures requiring video monitoring, Dr. Davies said.

“We do things now that we never even dreamed of doing,” she said. “The technology has increased tremendously in 35 years.”

Dr. Davies, who also designed the operating rooms in the HVN tower, said seeing the North Tower project come to fruition after about 2 years of design work was rewarding and exciting.

The patience, resilience, and understanding of health-care providers during the occasionally disruptive construction process that forced providers to navigate barriers and learn new routes was key, Dr. Davies said. Some services may continue to be shuffled around as the project progresses toward completion.

“It’s a big deal to learn how to work around construction and still maintain our standards of cleanliness and excellence,” she said. “That’s been a challenge and people have been very understanding.”

Other projects underway include renovations to the North Tower MRI area that will result in more recovery and induction space as well as a private room for patient evaluations separate from the clinical area and a small nook with computers. That area should be ready by the end of January. Down the line, five operating rooms are expected to be completed in August at the new Oaks Mall facility, where clinical space is now ready.