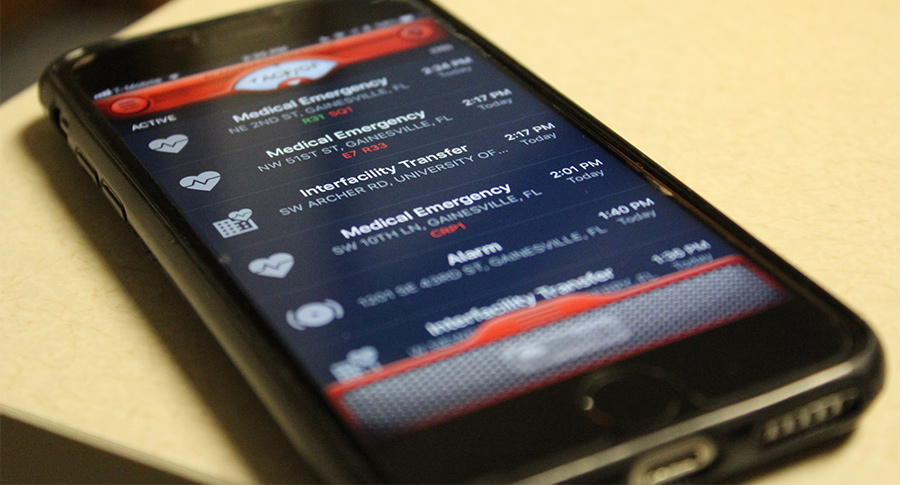 You use your smartphone to make calls, send messages, take pictures, and play games. Now you can use it to save lives.

Earlier this month, UF Health announced the public launch of a potentially life-saving smartphone app throughout Alachua County. PulsePoint Respond alerts users when a cardiac arrest occurs in a public place within a quarter-mile of anyone with the app. This gives users — anyone who can do chest compressions — a chance to double the survival rate from a cardiac arrest.

Alachua County joins over 3,300 communities that have launched PulsePoint. The app was designed to save as many lives as possible by increasing the chance that cardiac arrest victims will receive early intervention, which can play a critical role in survival. It alerts users when a 9-1-1 call center reports a cardiac emergency within a quarter-mile radius of them. Following directions from the app, the user is then able to help by locating the person in need and beginning chest compressions. On average, two people respond before Emergency Medical Services (EMS) arrives to take over, said Nikolaus Gravenstein, MD, the Jerome H. Modell, MD Professor of Anesthesiology, who funded the initiative.

“EMS takes 5 to 7 minutes to get to the scene; you can go a quarter of a mile faster than that,” he said.

PulsePoint has greatly increased cardiac arrest survival rates where it has been implemented, in some cases even doubling them. With the abundance of healthcare professionals in the Alachua County area, Dr. Gravenstein said he expects to see great increases in the community’s survival rates, at least doubling them. In September, PulsePoint responders in Alachua County were alerted of five nearby cardiac arrests.

“In the first couple of weeks of doing this, we had 535 people signed up,” Dr. Gravenstein said. “I think we could get close to 20,000 with community involvement.”

This initiative began as a collaboration between Dr. Gravenstein and Torben Becker, MD, PhD, an Assistant Professor in the Department of Emergency and the EMS Director of Prehospital Research in Alachua County. Funded by the Jerome H. Modell, MD, Professorship of Anesthesiology in the Department of Anesthesiology, it was propelled by several groups in Alachua County. Dr. Gravenstein struggled for two years to set up PulsePoint until he was introduced to Dr. Becker. Within 6 months, they successfully collaborated with several agencies, including the Alachua County Sheriff’s Office, Alachua County Fire Rescue, and Gainesville Fire Rescue, to bring PulsePoint to the community.

“With [Department of Anesthesiology Chair] Tim Morey’s enthusiastic support and the support of the College of Medicine and the hospital, I agreed to fund it via the Jerome H. Modell endowed professorship to get it started and maintain it for 5 years,” Dr. Gravenstein said.

Dr. Gravenstein’s and Becker’s future goals for the app include increasing community awareness and involvement and activating PulsePoint’s “Verified Responder” feature, which would allow medical professionals to also receive alerts when a cardiac arrest is reported in a private residence.