Dr. Rice was awarded a 2015 HERO OF MILITARY MEDICINE Award!

A Hero of Military Medicine is an individual who has distinguished himself/herself in medical research or clinical care through compassion, excellence and selfless dedication that go above and beyond the call of duty. He or she is committed to advancing military medicine and enhancing the lives and health of our nation’s wounded, ill and injured service members and veterans. 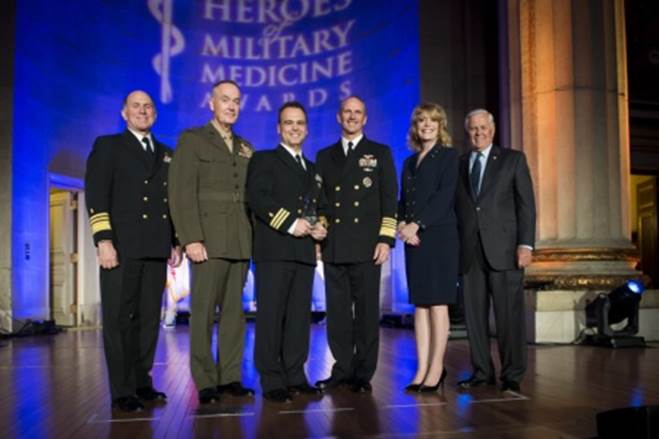 Commander Darian Rice, MD, PhD, USN and former UF Anesthesiology Resident was one of this year’s recipients.   We want to congratulate and thank Dr. Rice for his service.

Commander Darian C. Rice received his Bachelor of Science degree in Biology (cum laude) in May 1994 from Virginia Commonwealth University in Richmond, Virginia.  The following year he completed paramedic training at Tidewater Community College and was certified as a Nationally Registered Paramedic.  He was then accepted into the combined M.D./Ph.D. program at Eastern Virginia Medical School in Norfolk, VA.  Upon acceptance, he was commissioned as an Ensign in the Medical Corps, U.S. Naval Reserve in March 1995, under the Health Professions Scholarship Program.  He completed Officer Indoctrination School in Newport, RI from May – June 1995, graduating with Honors, and then began medical school in August 1995.  Following the first year of medical school, CDR Rice spent three months on active duty with SEAL Team 4, Naval Amphibious Base, Norfolk, VA where he instructed Combat Life Support, completed training in Wilderness Trauma Life Support and High-angle Rescue for Special Operations, and earned Expert Rifle and Pistol qualifications.  Later, during his fourth year of medical school, CDR Rice completed a one-month rotation at the Casualty Care Research Center, Uniformed Services University of the Health Sciences, Bethesda, MD where he developed medical threat assessments in support of a Presidential Protection Detail, and in preparation of a FBI-Hostage Response Team mission.  He also completed the Counter-narcotics Tactical Operations Medical Support (C.O.N.T.O.M.S.) course and published a review article entitled, “Terrorist Bombings: Ballistics, Patterns of Blast Injury and Tactical Emergency Care”.  CDR Rice graduated with his Doctor of Medicine class in May of 1999, and subsequently completed the requirements for the Doctor of Philosophy degree in Biomedical Sciences.  Under the umbrella of Biomedical Sciences, CDR Rice pursued the Systems Biology and Biophysics track with emphasis in Cardiovascular Physiology.  His dissertation involved the characterization of the molecular pathway by which vascular smooth muscle cells detect and respond to the pressure of their environment, and then direct coordinated functional and structural arterial remodeling.  As arterial remodeling occurs during prolonged spaceflight, CDR Rice was invited to present his findings at the NASA Center for Advanced Space Studies.  He was awarded a NIH Predoctoral Fellowship to complete this research.  In addition to the doctoral program, he was very active as a teacher and student mentor.  He taught physiology to medical students and was a clinical medicine instructor and research mentor for Physician Assistant students at Eastern Virginia Medical School.

Upon graduation in May, 2002, CDR Rice completed a Transitional internship at the Naval Medical Center, Portsmouth, VA.  In addition to the intense clinical workload, he was elected vice president of his class and also won the NMCP 18th Annual Research Competition for a poster presentation entitled “Pressure Mechanotransduction in Isolated Resistance Arteries”.  Following internship, he served as an Associate Investigator at the Naval Aerospace Medical Research Laboratory (NAMRL), Pensacola, FL, where he developed protocols to evaluate human cognitive performance under hypoxic conditions.   Using the Reduced Oxygen Breathing Device (ROBD), NAMRL has been able to reproduce altitude-related hypoxia in the lab and test subjects without the inherent risk of the hypobaric environment.  CDR Rice expanded this capability by developing procedures to incorporate flight simulators in hypoxia research.  He was thus able to implement a ground-based means of detecting decrements in flight performance and/or cognitive function that may occur at altitude. In the near future, such technology will be transitioned to the fleet as a means to refamiliarize aircrew with the sensation of hypoxia, permit preconditioning for operations at altitude, and improve overall safety in the cockpit.  In addition to this study, CDR Rice served as the primary investigator in a study to evaluate a new PC-based flight simulator syllabus as an adjunct to compliment the current primary flight curriculum.  It is believed that the addition of this training aid will not only improve pilot performance, but will also reduce attrition and the time required to become competent aviators. He was invited to present their findings at the Annual Scientific Meeting of the Aerospace Medical Association in 2004 and 2005, respectively.

In January 2004, CDR Rice began the Naval Flight Surgery program in addition to his research at NAMRL.  During this time he also passed the Board Certification Exam in Aerospace Physiology, began civilian pilot training, and enrolled in the Embry-Riddle Master of Aeronautical Science degree program with Specialization in Human Factors in Aviation.  Once winged as a Naval Flight Surgeon, he was deployed to the Gulf in support of Operation Iraqi Freedom where he served as the Division Head of Aviation Medicine for Carrier Air Wing Seventeen aboard the USS John F. Kennedy. He was the primary health care provider for 2,500 Air Wing personnel, and provided aeromedical insight for Aviation Mishap Boards, Human Factors Councils and Boards, and Aviation Safety Councils.  He also earned the designation of Surface Warfare Medical Department Officer.  Upon his return, CDR Rice served as the Interim Department Head of Aviation Physical Exams at the Naval Aerospace Medical Institute (NAMI), NAS Pensacola, FL.  Then, in September 2005, he was deployed to New Orleans as part of Joint Task Force Katrina to assist with the hurricane relief efforts.  In the absence of a functioning civilian medical system, he provided medical care to civilians as well as active duty military personnel, and was readily available 24/7 to provide care and/or respond to flight line emergencies.  He also flew patrol missions with the U.S. Coast Guard.  While assigned to NAMI, CDR Rice also completed the Space Operations Medical Support Training Course and was a member of the DoD Shuttle Support Team for the return of STS-121, and later for STS-117.  In addition, he continued to pursue research and was a co-investigator on a collaborative study with NASA-Ames to evaluate various treatment modalities for air and space motion sickness.  During this time, he also served as the Treasurer for the Society of U.S. Naval Flight Surgeons from 2004-2007, and remains a life member.

In August 2006, CDR Rice was deployed with Marine Wing Support Squadron (MWSS) 273 to Al Asad Air Base, Iraq, to serve as their flight surgeon.  Upon arrival, he was further detailed as the Group Surgeon for Marine Wing Support Group (MWSG) 37 where he provided key medical oversight and guidance to the 1600+ Marines and Sailors of 3d Low Altitude Air Defense Battalion (LAAD), Marine Wing Support Squadron 273, and Marine Wing Support Squadron 373.  He was instrumental in the development of a medical reorganization plan to streamline and improve the effectiveness of health care aboard Al Asad Air Base.  In addition to his duties as the Group Surgeon, he was also the Battalion Surgeon/Officer in Charge and sole medical provider for the combined 3d LAAD Battalion / MWSG-37 HQ Aid Station.  Directly responsible for the primary medical care of over nine hundred military and contracted personnel, he provided the medical oversight and supervision required for a myriad of tactical missions such as Mounted Combat Patrols, Perimeter Patrols, Entry Control Points, Base Law Enforcement, and the Quick Reaction Force (QRF).  He established the SOP for the medical department’s role in the QRF response.  He seamlessly orchestrated numerous medical evaluations, consultations, and medevacs while maintaining the highest quality of patient care.  He developed a Patient Medevac Tracking System to facilitate two-way communication following patient departure from the area of operation.  He was instrumental during several mass casualties at the Surgical Shock Trauma Platoon Level II hospital.  He also earned the designation of Fleet Marine Force Qualified Officer.

In 2007, CDR Rice was selected to complete civilian residency in anesthesiology at the University of Florida, under the Navy Active Duty Delay for Specialty program.  During residency he was selected Chief Resident in a program of 80 residents, and served on the Resident Didactic Curriculum Committee where he had the opportunity to propose and implement improvements to resident education.  He was also very active in various research endeavors.  He was accepted into the resident Clinical Scientist Track where his interest was traumatic brain and spinal cord injury. He was involved in research to investigate potential biochemical markers of injury identification and progression, and as a potential guide to clinical management.  Following residency, he was selected to complete fellowship training in Cardiothoracic Anesthesiology at the University of Florida.  He proactively developed the orientation and educational curriculum for residents on cardiothoracic anesthesia and echocardiography, and institutional protocols for various cardiac surgical procedures.  He was also a Principle Investigator on a collaborative clinical study with NASA to evaluate a new technology for non-invasive cardiac output monitoring.

In addition, he served as a member and Team Leader for the NASA/UF Space Shuttle Medical Support Team for STS-131, 133, 134 and the final shuttle mission STS-135.

For his experience and enthusiasm for the space program, CDR Rice was selected by the Navy to be considered for the NASA Astronaut program, ultimately reaching the “Highly Qualified” (~ top 7%) group of applicants.

Following fellowship training in August, 2011, CDR Rice returned to active duty as a staff cardiothoracic anesthesiologist at NMC Portsmouth, VA.  Soon thereafter he was hand-selected to serve as the Residency Program Director and Chief, Division of Cardiothoracic Anesthesiology.  As program director he proactively developed a cutting-edge academic program which included a comprehensive learning curriculum for all specialties of anesthesiology, simulation training for intraoperative emergencies and interdisciplinary crisis resource management, critical care ultrasound training, echocardiography, and cadaver laboratory for teaching airway anatomy, and acute and chronic pain procedures.  As Chief of Cardiac Anesthesiology, he developed protocols to reduce blood transfusion requirements, perioperative atrial fibrillation, and overall morbidity and mortality in cardiac surgical patients. He also serves on the Editorial Board for Seminars in Cardiothoracic and Vascular Anesthesia.

During this time, CDR Rice volunteered to participate in a (civilian) humanitarian mission to Belize where his team performed the first ever open-heart surgery in the country.

Upon his return he resumed his role as Residency Program Director and continues to advance resident education and department research endeavors. He has expanded the resident simulation curriculum and was recently designated the Anesthesia Simulation Subject Matter Expert and invited member of the Command Healthcare Simulation Advisory Committee.  An advocate for research, principle investigator and assistant department research coordinator, CDR Rice was recently elected Chairman, NMCP Scientific Review Committee which evaluates all research proposals for scientific merit, safety and design.